The Destin family and Destin, Florida have been intertwined since Dewey’s great, great grandfather, Leonard Destin, founded the town in 1835. The adventure began a few years earlier when Leonard, his father George, and his brother William set out from New London, Connecticut with three ships and ran into a hurricane near Cape Canaveral, Florida.

Today the Destin family and friends, using original Destin and Gulf Coast recipes, are proud to serve seafood and other favorite area side dishes to local friends and out-of-town guests alike. While we maintain a casual atmosphere, we are serious about great tasting food. Therefore, Dewey makes it a practice not to use food warming lamps which he feels turns quality fish into chewy and rubbery leftovers.

Only when the food is just right do we bring it to your table… which sometimes means that certain items may arrive before others are ready (especially when busy). Please relax, enjoy the view, the weather, the company of fellow diners, and remember our promise as various portions of your order arrive: 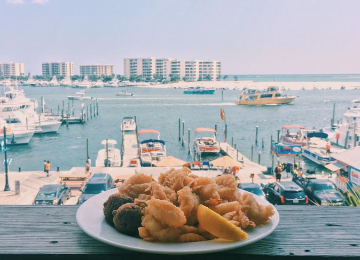 Our History
The Destin family and Destin, Florida have been intertwined since Dewey’s great, great grandfather, Leonard Destin, founded the town in 1835. The adventure began a few years earlier when Leonard, his father George, and his brother William set out from New London, Connecticut with three ships and ran into a hurricane near Cape Canaveral, Florida. Two of the ships, and Leonard’s father and brother, were lost at sea.
Stories had long circulated in the port of New London about the excellent fishing to be found off the Florida coasts and Leonard decided to continue on and look for the best fishing he could find as well as a place to settle down. In 1845, Leonard Destin met and married Martha McCullom from South Carolina and built a lovely home for a growing family (It was located 100 yards to the north of the current restaurant). As a Yankee, Leonard was suspected of being a spy and was imprisoned near Freeport, Florida during the Civil War. Scheduled to be hung, the circuit judge decided to spare Leonard’s life because he was a fellow Mason.
Following the war, Leonard returned to the area and lived here with his family of 4 sons and 3 daughters until his death in 1884. By the late 1870’s Leonard had built a thriving commercial fishery and employed many people in the area which was then called East Pass. In 1879, Leonard hired a 13 year old boy named William Marler who proved dependable and hard working. In a few short years Leonard gave William command of his own ship. Over the years Captain “Billy” sailed the mail in and out of East Pass and, to make things easier for locals, created an informal post office. In 1904, Captain Billy was formally made postmaster.
An inquiry from Washington requested the name of the official new post office and Captain Billy responded with "Destin" in honor of his first employer. Destin remained undiscovered and pretty much an island unto itself until the mid-1930's when the Marler Bridge was built and the world began trickling into the Emerald Coast. In the 1940's and 50's most of the growth came from an influx of military retirees who became familiar with the appeal of Destin’s white sand beaches and cool sea breezes while stationed in the area. Condominium developers in the 70's and 80's provided the next growth spurt with Destin becoming officially incorporated in 1985. During the post World War II era, Buck Destin, great grandson of Leonard, continued building the family commercial fishing enterprise.
Buck’s only son, Dewey Destin, started working the boats and the processing plants at an early age. Following college at Auburn University, Dewey returned to the family business where it continued to grow by catching and providing bait fish for charter captains in the region as well as selling all types of favorite fish to the local restaurants. In 2000, a ban on net fishing by the Florida Fish and Wildlife Commission effectively put the Destin fishing enterprise of 11 commercial fishing boats, 30,000 square feet of freezers and ice houses, and over 40 employees, out of business.
Following the ban, Dewey Destin along with his wife Rebecca, his sister Nina, and all the kids focused their energies on running two retail seafood stores and concentrated on providing the highest quality fish to the local inhabitants and restaurants of the surrounding area. Dewey’s knowledge of fish and how it is best served led to expanding the Destin market into this small, specialized restaurant. 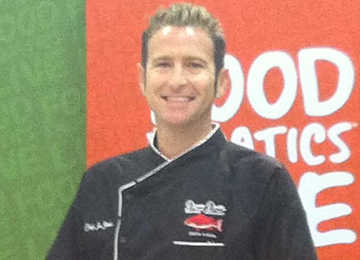 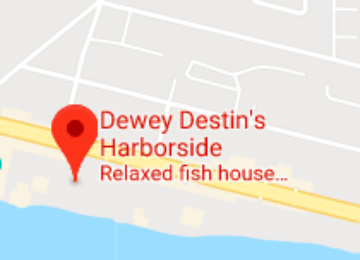 Located on the Destin Harbor, Dewey Destin’s Harborside serves freshly caught seafood daily. Enjoy the view of the Destin Harbor from the outside deck and the culinary talents of award-winning Executive Chef, Jim Shirah. Voted best seafood on the Emerald Coast. Great for groups, families or an intimate dinner in the heart of old Destin.

If you like Grouper fish this is the place to be! I have had it cooked every way; I like bronzed best. Fried is good, but drier and more breading than fish. Bronzed is a big slab of fish and it melts in your mouth! Awesome place.
Grant N.
We were recommended this place and we enjoyed everything we ordered. The fresh fish was (red snapper) excellent! The captain's platter also delicious as well as the crab cakes and chicken tenders. Would recommend it to other absolutely. Hate Junk Mail? So do we. We promise we won't flood your inbox.

Added to your cart: